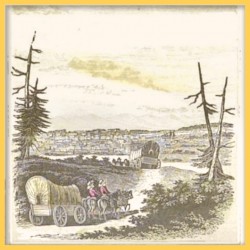 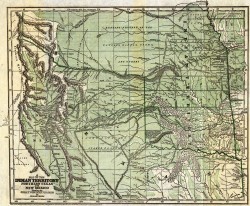 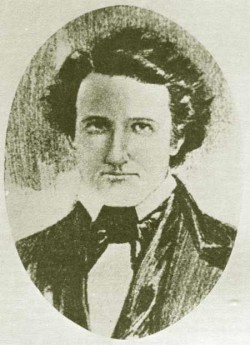 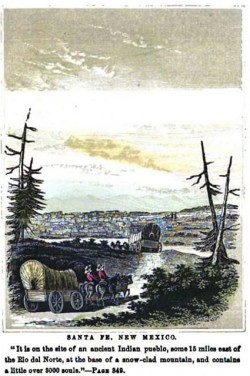 Two hundred years ago, the U.S. opened trading with New Mexico, along what would become the Santa Fe Trail. Josiah Gregg traveled back and forth from New Mexico to the United States for nine years before writing his popular Commerce of the Prairies, where this map appears. In the NMHC Atlas, you can explore the map through the words of Gregg himself.

At last all are fairly launched upon the broad prairie -- the miseries of preparation are over -- the thousand anxieties occasioned by wearisome consultations and delays are felt no more. The charioteer, as he smacks his whip, feels a bounding elasticity of soul within him, which he finds it impossible to restrain ; -- even the mules prick up their ears with a peculiarly conceited air, as if in anticipation of that change of scene which will presently follow. Harmony and good feeling prevail everywhere. The hilarious song, the bon mot and the witty repartee, go round in quick succession ; and before people have had leisure to take cognizance of the fact, the lively village of Independence, with its multitude of associations, is already lost to the eye.

This map ostensibly is included to help the gentle reader follow the “Wild West” adventure to an exotic, foreign destination, but that neutrality is quickly belied by a closer look.

At the time Gregg made this map, the Santa Fe Trail had been trafficked for decades, and this popular guide to an exotic land drove ever more travelers to try their luck. The map shows the route between Independence, Missouri and Paso del Norte (now Ciudad Juarez). Just across the river, in modern day El Paso, the American Magoffin family established their trading empire, and began to influence New Mexican politics. Gregg offered the American public some of the first descriptions of New Mexico, which we used to annotate his map. Throughout the Atlas, the full-text version of the book can often be accessed through links in the bibliography.

Although Gregg did draw boundaries around the Indian territories that must be crossed before reaching New Mexico, he avoided drawing international boundaries.  Crossing the Arkansas River at the Caches generally meant you had left the U.S., but with the annexation of Texas the year before, the issue was unresolved, and the boundary unsurveyed. Moreover, Gregg was in deep sympathy for the Texan cause. Although there is no boundary between the new state and the Mexican department, his labeling indicates a Texan claim to New Mexico’s land that goes right to the summit of the Sangre de Cristos, and includes the entire Eastern Plains.

He takes care to note the route of the two Texan parties who invaded New Mexico, mistakenly thinking New Mexicans were interested in independence. For Gregg, the New Mexican’s capture of the Texan Santa Fe Expedition represented “the most glaring outrages upon American citizens.” He puts the blame for this, as well as for many things on New Mexican Governor Manuel Armijo, calling him “an ambitious and turbulent demagogue, who, for some cause or other, seemed anxious for the downfall of the whole administration.”

In addition to including the routes on his map, Gregg refers to the disaster of the 1841 Texan Santa Fe expedition many times in Commerce of the Prairies, and to the consequences for relations between Texans and New Mexicans, but he declines to elaborate on the incidents of 1841, referring readers instead to George Wilkins Kendall's popular first-hand account, where Kendall describes Armijo as a “petty tyrant” and a sheep thief.

Lest the reader think that the governor was the only undesirable in New Mexico, Gregg is not shy in expressing his repugnance at the “generally dark” skinned New Mexicans and their “bigotry and fanaticism.” He describes them as “cunning" and “cringing and subservient,” and having “but little bounds to their arrogance and vindictiveness of spirit.”

Within a few years, the Army of the West would march down the Santa Fe Trail and Mexico would be forced to cede New Mexico (at the time considered to extend all the way west to the Colorado River) to the United States, as well as the much more valuable prize of California.

Although the map is geographically adequate (notably missing the Tularosa Basin), its details point toward Gregg's bias in favor of Anglo Americans having control of New Mexico. As the first introduction to New Mexico for many Americans, it provided perfect fodder for widespread support of invasion and occupation.

NMHC’s online Atlas features historic New Mexico maps, annotated with the words of people who were in those places at that time, as well as historic images, oral histories, and bibliographic links to full text books and other sites. The site also offers audio, lesson plans, books and tools for classroom use.