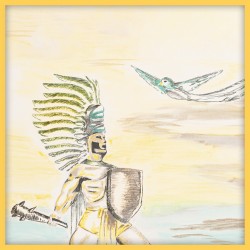 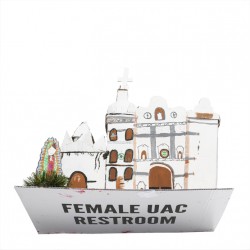 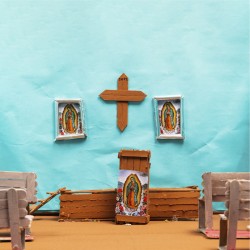 The Branigan Cultural Center in Las Cruces New Mexico is proud to announce the exhibit “Uncaged Art” July 2-September 18, 2021. This exhibit features artwork from youth held in the Tornillo Children’s Detention Center. The exhibit was created by the Museo Urbano in the History Department at the University of Texas at El Paso. Dr. Yolanda Chávez Leyva of the University of Texas at El Paso, a co-curator of the exhibit, shares the exhibit description:
“Uncaged Art Tornillo Children’s Detention Center” is fundamentally about Central American children who came to our nation seeking security and safety and found themselves incarcerated within the walls of a sterile detention center built in the Chihuahuan Desert. The young artists represent some of the almost 70,000 migrant children detained by the United States in 2019. The artists who created the works featured in “Uncaged Art” remain anonymous, both because of their status as minors but also for their legal protection. We don’t know the names of the children or where they went after Tornillo closed. We don’t have their words to tell us what they felt or remembered as they put brush to canvas or crafted soccer players from pipe cleaners. What we do have is the art to tell us about their feelings, their hopes, their dreams, and their memories of home. What we have are the images of lush landscapes filled with flowers and trees, and the birds flying in the sky. We have the recreation of a soccer field filled with players and spectators and models of churches representing their faith. What we have are our own reflections and emotions as we view the art created in detention because of our nation’s asylum policies.

‘Behind every beautiful piece of art is a child longing to be free.’ These are the words of “Freddy” (not his real name), a young Honduran who had been detained at Tornillo and who was viewing the exhibit for the first time. Paintings, drawings, three-D models of churches and parks, as well as mannequins with flowery dresses, make up this exhibit. Birds, especially the quetzal, play an important role in this art collection. A story related by the children to the staff is that the quetzal cannot be caged, or it will die. From this came the title of the exhibit: Uncaged Art. Like the children who longed to be free, we wanted their art to be free as well.

In 2018, the United States Health and Human Services Department opened an emergency “influx shelter” for youth who had been separated from their parents while crossing the border to ask for asylum. Some had crossed the border unaccompanied. Although it was initially expected to house 400 children, by the time it closed in January 2019, it held over 2,500. The camp was opened in a rural area of El Paso County, Texas amid cotton fields, pecan orchards, and the border fence. Tornillo was highly militarized with the youth constantly under surveillance by staff and guards. Often, the young people did not know where they were and none knew when or if they would be released or see their families again. They were denied visitors and gifts. Staff signed non-disclosure agreements and we knew little about what living there was like. Attorneys and psychologists reported depression and anxiety were widespread. In late 2018, two social studies teachers established an art project where youth would produce art that related to their home countries, their culture, and their memories of home. Over four days, they generated over 400 pieces, both in teams and individually. The staff chose approximately 30 pieces to keep and threw away the rest. In January 2019 as Tornillo began to shut down under growing public pressure, the University of Texas at El Paso’s Museo Urbano was given the art through the mediation of Father Rafael Garcia, SJ, who had given Mass at the detention center. The art was freed to tell the story of youth, who despite isolation, anxiety, and depression, still held hope for the future.

Norma Chairez-Hartell, the Exhibits Curator for the Las Cruces City Museums, has been working to bring this exhibit to Las Cruces. She writes:
As a former undocumented immigrant living in southern New Mexico, it is important for me to bring topics that effect our borderlands home to the museums. Uncaged Art tells the story of immigration and ultimately the nations shared history. By bringing exhibits like “Uncaged Art,” we are creating a space for hard, but necessary, dialogue and bringing awareness to a crisis that is ongoing. Getting a glimpse of the artwork done by the detained children allows the viewer to see the pain, struggle, and persistence, if only for a brief moment.

One of the pieces of artwork that can be seen in the exhibit is mounted on a piece of cardboard that says, “Female UAC Restroom”, “UAC” stands for Unaccompanied Alien Child. Using Alien to refer to a human is callous and having to use that sign to create art is a sign of perseverance and defiance. That sign went from being an inhumane and degrading object to a very powerful piece of artwork that tells the story of our times, how the U.S. is treating immigrants, and how the detained youth are responding.

You can see this exhibit in the outdoor courtyard of the Branigan Cultural Center in Las Cruces New Mexico from July 2 to September 18, 2021. Below are additional educational events that you can tune into to learn more about child detention:

Culture of Empowerment
Culture of Empowerment is a series designed around the idea that people are powerful when learning together. Each quarter’s topics will revolve around a single theme, with chances to dig deeper, learn how to activate community impact, and connect. The theme for July through September is Youth and Migration. These events are in conjunction with the exhibit “Uncaged Art” that features art created by youth held in immigration detention.

Know Your Rights: Immigration with the American Civil Liberties Union
Wednesday, July 7, 5:30–7 pm
Learn what rights people in the Immigrant community have and how to use them. Watch the full video on Facebook @LCMuseums

Community Roundtable: Child Detention and Separation
Wednesday, August 4, 5:30–7 pm
Hear from local experts on child detention and separation about the history, policies, migrant experiences, impact on our community, and future of the issue in our borderlands region. Tune in with the link https://rebrand.ly/ChildDetention.

Community Roundtable: Dreamers
Wednesday, September 1, 5:30–7 pm
Hear from the New Mexico DreamTeam and Dreamers themselves about the history, policies of the Dream Act, experiences of Dreamers, and the current situation for Dreamers in New Mexico. Tune in with the link https://rebrand.ly/NMDreamers.

Expression and Migration Workshop
Wednesday, July 28, 5:30–7:30 pm
This workshop is inspired by the exhibit “Uncaged Art,” which features art created by youth held in immigration detention. Participants learn more about youth and migration and then take the opportunity to express themselves through art. Participants are provided an activity kit with various art supplies, from textiles to markers, and create art pieces that express their emotions about the migration experience. The works will then prompt further conversation and learning among the group. Register to attend by emailing kmyers@las-cruces.org.

Kayla Myers is the Education Curator for the Branigan Cultural Center in Las Cruces New Mexico. She is of European and Eastern Shoshone heritage and calls the borderlands her home. Kayla holds a Master's in Cultural Anthropology and is a lifelong advocate and cultural worker.

« Previous Column: How Has the Pandemic Affected Museums? Examples from the Blackwater Draw Museum at Eastern New Mexico University Next Column: Healer of the Unseen:  Dr. Meta L. Christy »