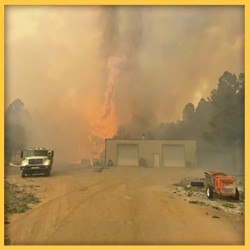 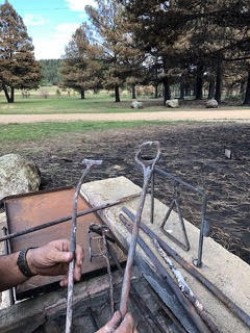 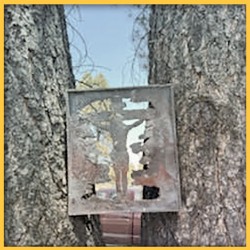 In late summer, clouds thicken quickly on the ridgeline of the sierra, and the distant rumble of their thunder echoes endlessly in the mountain canyons and in the tall stands of spruce until, like the water in the river, the sound ebbs its way out to the open llanos to the east.(1)

From the base of Hermit’s Peak -- where employees of the Forest Service first pointed igniting torches at piles of dead trees, brush and branches -- to the upper end of the Chacon Valley there are some 60 miles of interconnecting mountain canyons and valleys on the eastern slopes of the Sangre de Cristo range.  This also is where the largest uncontrolled wildfire in New Mexico history started on April 6, 2022.  The ridges and cliffs zig-zag and turn back on themselves, like a heap of broken accordions.  Even if one is lucky enough to have been born in the area, it can take a person a lifetime to visit the spots hidden in this maze of cañadas, pine forests, pasture lands and villages that dot the area.  People who know, who have seen these places, will tell you how astonishing and beautiful they once were.  Now, those returning to them after the seven weeks of fires, will describe how pitifully scarred, how tragically bare and stripped the forests are; how naked their querencia looks today.

I was born in Mora, and I felt secure and protected as a young child growing up there.  I lived with the small anxieties of childhood but always felt surrounded by loving, caring adults.  I arrived late in the game as the last of nine children.  My father Santos was 47 and my mother Adela was 42 when I was born.  This meant that their generation of friends and neighbors were the grandparents of the kids I went to elementary school with.  By virtue of friendships and constant visits to our house, I came to be raised not by the prior generation, the parents of my friends, but by their grandparents, compadres, comadres, tíos, tías, cuñados and concuños whose experiences in the Mora Valley sometimes went back to the First World War and to the Great Depression.  World War II, which ended eight years before I was born, still distressed all New Mexicans.  I remember how the ancianos accounted for the disturbing threats that resulted from a set of catastrophic global, scientific and geopolitical realities so powerful they came to be felt in the changing customs and habits of the people.  There was the ominous lab complex at Los Alamos that made New Mexico an atomic research zone, work that led to the detonation of the atomic bomb and the horror of fire-bombed Japanese cities and the global antagonism of the Soviets who had vowed to bury America, not from without but from within.

No one ever spoke about threat of forest fires or droughts or controlled or uncontrolled burns.  Snowfalls were deep and stayed on the ground for weeks.  Heavy rains began in June and cooled off the mountains every single summer afternoon.  When it was time to celebrate the Feast of the Assumption on August 15 people fretted over how they would get up to the Santa Gertrudis Morada without getting stuck in the ruts of water spilling out from the acequias on the road going up the west side of the Valley.  Pickups and cars would try to cross and almost always got stuck in the boggy meadow halfway up the road.  I and others were sent down to help push our vecinos out one by one.  The large vega near the center of town was always soggy, wet, humid; water drained out of it through a dozen brimming acequias.  No one could conceive that a fire would race from one valley to another or that fir trees would crest like giant fósforos and rain hot embers on the next village.  This was a time when the mountains and valleys were healthy.

Farmers and ranchers ritualistically burnt weeds and brush as part of the yearly cleaning of the acequias, the most out-of-control that these ditch-bank fires got was when they charred a few fence posts along the acequia.  But fires in the sierra were rare and small, almost always started by lightning, not Forest Service personnel.

I drove up to Mora last week having kept in touch with family, friends and relatives during the most severe days of the fires in early May.  I was astonished by the ferocity of the fire’s destruction, pushed on by 60-mile an hour winds. Over several weeks hellish fires leapt from one ridge to another.  After the first evacuation of Mora, I spoke to Tony Esquivel, a lifelong friend.  I asked him “Tuvieron que salir por el humo?” No, he replied, confident at that moment that his house had dodged the fires and the smoke plume, “No más aquí al Allsups salimos.”  Three or four days later the valley lost power, and, like it or not, the Esquivels evacuated.  I reached my primo Antonio Martínez in Santa Fe.  He was grateful that fires had not crossed NM 518 and that the Cleveland Bar, his cantina and home, was untouched.  The homes of my brother-in-law and nephew further up the valley were spared, but my cuñado lost 280 acres of forested land, scrub oak, piñón, and stands of old growth pine and Douglas fir.  All gone.

My spirit shrank when I drove up to see a friend in El Monte Aplanado.   All along the gravel road leading to the box canyon at end of flat expanse, I began to see greater destruction to properties, homes, and buildings.  Twenty or more homes gutted, wrecked, family belongings singed amid smoldering trees.  A plume of smoke was still coming up behind Morfi *.  I drove up, honked the horn, and two heelers barked to alert the residents.  Leo Paul and Annabelle met us, a bit startled by the visit.  The house they lived in survived, but a hundred yards away the house of Leo Paul’s mom and dad had burned to the ground.  It was also the family home where children and grandchildren had been brought up and the home that held the accumulated work and achievement of generations of Pachecos.

Leo Paul and Annabelle began to describe the terror of the fires as they saw them crest the nearby ridges and move toward them (photo 1).  Left with no options, they faced the mind-numbing decision to evacuate.  They would do this twice.  When they were finally able to return, they were unable to prepare their parents for seeing their home in ash and rubble.  The couple wept unconsolably.  The wildfires burnt down possessions, some needed, some desired, and they took treasured things, items handed down from generation to generation, the mementos of how manitos have lived and survived over for centuries on the land.

Leo Paul was told by some insurance adjuster to just scoop the rubble and haul it away, but he decided to go through every last bit of it.  Painstakingly, he dusted off one item at a time.  A few things survived: two wood stoves that had carefully been restored before the fires; his father’s and grandfather’s branding irons (photo 2), registered brands going back to the 1890s; his first metal cutout art piece, an image of Christ crucified (photo 3); a silver belt buckle his mother molded and etched for him when he was a young rider;  a molten pile of silver from a number of other silversmithing projects his mother was working on.  Down the road several homes were lost at Ledoux and many more were lost in Rociada, Gascón, Peñasco Blanco, San Ignacio and Las Tusas.  Of the 10 or so Moradas in the area, one at San Ignacio was lost to the fires.  Before evacuating and amid the chaos and as the fires moved further north and into Chacón, el valle de arriba, Leo Paul drove to check on the mission church, Santo Niño de Atocha, and then the Moradas in the Mora Valley.  These structures, all built by members of the community, survived. At more than one, the tongues of flames dramatically came right up to them and departed, combing their way through the nearby stands of pine trees.

Everyone I spoke to and everyone I know has been devastated, realizing how over several generations the U.S. Forest Service has been a poor neighbor and a poor caretaker of the villager’s “common lands.”  These are areas that were once a part of the land grants made to villagers and settlers to steward, to use and develop for the common good.  The climate has changed, the forests have gotten drier and have not been constructively thinned; timber and other resources have been held hostage.  Great stands of forest are now gone forever -- to the detriment of everyone.  The residents of San Miguel, Mora and Colfax counties, poor by every economic indicator, are now poorer -- made so by the loss of all they hold as beautiful and sacred.

I spent the night with my nephew Francisco in Holman.  We arrived after dark, and we were startled by the rustling sounds of an animal in the piñón and sabinal.  Could it be a raccoon, an elk, a deer, a bear?   Honk the truck horn.  I do.  The sound ebbs away.  A week later, my nephew confirms that what we heard was a black bear.  The animal has been coming back almost every evening.  It’s as stunned and bewildered as everyone else.  Brother or Sister Bear’s forest and the food it gives is gone.  The bear is hungry and comes and stands outside the door.   Sniffing, scratching, searching for a way to live another day.  All creatures in the mountain valleys are now up against some bitter times.

Editor’s Note: Morfi is how its called entre la gente.  It is said that this lake was named for Fray Juan Agustin Morfi (1735 -1783) and recalls his time in NM.  In maps and signs it is spelled as Morphy Lake.

A. GABRIEL MELÉNDEZ is a Distinguished Professor Professor (retired) and the former Director of the Center for Regional Studies (CRS) at the University of New Mexico. He is the author and editor of a number of books, among them: So All is Not Lost: The Poetics of Print in Nuevomexicano Communities, 1836-1958 (UNM, 1997) The Multicultural Southwest: A Reader (Arizona, 2001) Santa Fe Nativa: A Collection of Nuevomexicano Writing (UNM, 2010) Hidden Chicano Cinema: Film Dramas in the Borderlands, (Rutgers University Press, 2013) and The Legend of Ponciano Gutiérrez and the Mountain Thieves (UNM 2013) an illustrated book for young readers. Meléndez’s book of short stories, The Book of Archives and other stories from the Mora Valley/El Libro de los archivos (2017) moves his writing from the rigors of archival research onto the open tableland of creative and imaginative writing.

« Previous Column: A DIFFERENT KIND OF BILLY THE KID  Next Column: Healer of the Unseen:  Dr. Meta L. Christy »