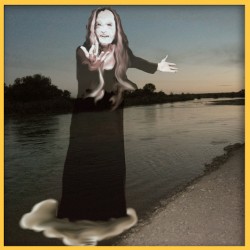 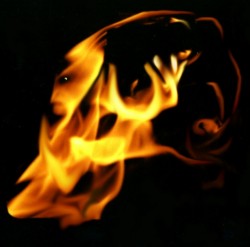 The dead are scared by the living!

New Mexico is a land of mystery, suspense, and intrigue. One is easily captivated and drawn by immortal tales filled with energy, passion, and enchanting mystique. The crisp autumn air of October leads us to reflect on a visual and imaginative journey that unfolds before us when recounting certain events which, at times, are lost in time and place.

Cándido from San José traveled to the sleepy village of San Juan to visit his abuelos. He found his old grandparents sitting quietly on their pine wood benches in the portal. His Tata Lino was asleep, while his Nana Odilia was busy working on a hand-stitched colcha. She was extremely excited when she caught a glimpse of her grandson trudging along to their house through the winding dirt trail near their home. The cheerful old woman immediately invited him into the kitchen to eat. Nana Odilia gave Cándido a big strong kiss on the cheek, hugged him, blessed him and woke her snoring husband up. “¡Bienvenido hijito!, it’s so good to see you!”

The warm and inviting adobe casita held many hand-carved wood santos, Penitente crosses, and beautiful retablo images of saints. There were also representations of guardian angels such as San Miguel used for protection that were housed in ornate tin frames. The tinsmith who made the frames was from Rio Arriba. He used old tin cans, scrap tin iron, and discarded wallpaper to fashion his prized tinwork. An iron skillet with hot red chile was on the wood stove along with another filled with chaqueue, a delicious blue cornmeal gruel. Nana Odilia also had fresh tortillas, and beans, guisados with manteca (lard) and flour.

Cándido relished and thoroughly enjoyed every mouthful of tasty morsels. At the table, Tata Lino sleepily spoke, “El otro día yo estaba hablando con el Difunto Luis. Él me platicaba de cuando andaba en la borrega en las montañas. I enjoyed talking with Luis about the good old days when he was out sheepherding and his experiences, imagínate, just imagine.” “Ah que hombre,” Nana Odilia said. “Difunto Luis has been dead about 15 years. How could you have been talking with him the other day?” Slightly perturbed, Tata Lino continued, half smiling, “As I was saying, the other day when I was talking with Difunto Luis he brought back many good memories with his stories.” There was an ingrained beauty in Tata Lino’s words as he lovingly spoke about his old friend as though he were still alive.

In New Mexico’s Hispanic culture, the deceased were not gone forever, but were always present in memory and spirit. They always spoke of the dead as though they were not only interjecting and listening but taking a vital part in daily conversation. The dead were always also constantly remembered in prayer. The literal translation of difunto is deceased, but in New Mexico this word meant much more than that. It was a vital term of endearment showing love and respect for those that had passed away. Also added was “Que Dios lo tenga en verdadero descanso. May God have him/her in true peace.” Why was this added? People believed that a spirit could stay on Earth if unrepentant and could not pass on to Paradise. And so it was with the agonizing doomed spirit of La Llorona, the Wailing Woman who eternally cries and is trapped forever without finding peace. This centuries-old story along with others is a moral story, one that teaches an essential lesson.

In New Mexico, one learned through a multitude of dichos, proverbs that cautioned about taking care of oneself, being kind with others, and living a good and worthy life tied in with faith. A popular dicho was, “De la Suerte y la Muerte, no hay nadie quien se escape.” Of life and death there is no one that escapes. People in the towns and villages firmly believed in the Angel of Death, called Doña Sebastiana. This feared spirit could appear at any time and take you with her. One had to be prepared for her sudden and terrifying appearance. La Llorona, for example, could appear to children who would wander off, play in arroyos, or in, or near rivers. She waits and searches for her own children who drowned and might take you thinking you’re one of hers. Her eternally grieving spirit and the ghosts of others comingle with the living.

In old New Mexico, superstitions coincided with a firm belief in the paranormal. The supernatural world was an important part of the natural world. One had to seek protection from evil and harm which could be caused by certain spirits and evildoers. One could not leave fingernail clippings nor hair lying around, but had to dispose of these properly, lest a witch collect them and cast an evil spell on you. The use of garlic as protection was a part of the Middle Ages, which continued in New Mexico. Crosses were also placed over doorways to keep evil from entering. Witches could transform themselves into owls, or balls of fire called Bolas de Lumbre. Mal Ojo, the belief in Evil Eye, was as old as humanity and was kept alive in New Mexico. This was the thought that staring eyes could unwittingly, or purposely harm someone, especially a beautiful baby or child. Only a Juan, someone with special powers, could ward off Evil Eye.

How could one tell if a spirit was around? If a candle flame burned blue, then a ghost was nearby. If you felt a cold chill pass by you even in the summer, then a phantasm was near you. Special prayers for the dead were composed for the purpose of protection. Special care had to be taken with duendes, goblins that hid in closets, or under beds and appeared late at night.

Ray John de Aragón’s book, ENCHANTED LEGENDS AND LORE OF NEW MEXICO, Witches, Ghosts, and Spirits was required reading for the course, Humanities, Society, and Culture: Only in New Mexico? The class was carried by the University of New Mexico Honors College and was taught by Dr. Juliette Cunico, former Shakespeare Specialist of the English Department at Bradley University. His book, HIDDEN HISTORY OF SPANISH NEW MEXICO placed 13th of 47 Best-Selling Mexico History Books of All Time, as featured on CNN and Forbes Inc. His archives are stored at the Southwest Studies and Research Center at UNM. He has 20 published books and will keynote at the New Mexico Associated Press Conference in Santa Fe in November.