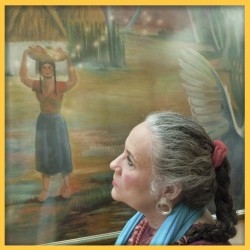 Denise Chávez in front of "Lalo" Chávez's mural in the lobby of La Posta in Las Cruces, NM. Photo by Daniel Zolinsky. 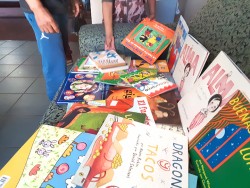 I climbed one bumpy narrow step at a time with a rickety handcart, struggling up the worn gray carpeted stairs to the second floor of a local hotel with boxes of books for children, young people, adults. The books were in Spanish, all genres, including books that brought hope: Bibles and dictionaries, all for weary travelers on the Great Road of Migration. Refugees moved through the system and found temporary shelter in my town, in this local motel. Theirs was a brief respite stop in that journey to their host families somewhere in the U.S.

Earlier I had checked in at the command post, a hotel room on the first floor that displayed a giant map of the U.S. Pushpins showed everyone where they were headed, to host families, relatives, loved ones.

I arrived with plenty of time and set up the books in our makeshift book area. The volunteer shift coordinator then called families and adults from their rooms. “The book lady is here and has books are for you, you can take them with you.”

The children’s books were displayed on the couch of the second-floor lounge, the adult books on the landing between the stairs. My husband and I knew the ritual as we had done it many times before. And yet, every time was different. Who would be waiting to leave the motel today and where were they headed? Would there be many children? Oftentimes there was only one parent with a child, and this was always disconcerting to see.

Today two sisters from Guatemala came out of their shared room to look at the books, the older one traveling with her teenage son. I don’t remember what books they were interested in, but I assured them that the books were theirs to keep. And as it was Mother’s Day, I showed them a poster board full of jewelry, earrings, bracelets, and necklaces. It was a day of gifts.

My mother was born on December 24, and always felt that she was cheated out of her birthday gifts. She was right. My gifts to her were rare. As a child, I had no allowance and little expectation of money ever crossing my path. If my sister and I gave a gift to our mother, it came through the auspices of our father. My parents were divorced when I was ten and my father was unlikely to be visiting for Mother’s Day. I only recall two gifts he gave our mother: an electric skillet that became our favored pot roast pan, and a metal address book, the kind that flipped up when you moved a lever to the letter of the alphabet of the person you were looking for. He wrote on the back with a black Magic Marker: To Mother. From Ernest.” My father’s name wasn’t Ernest, but somehow over the years he’d adopted the name. It sounded better to him than Epifanio. Also, he was a Junior. Who ever wanted to be an Epifanio, Jr. in a small dusty town where nothing ever happened? Better to be an Ernest somewhere else.

One year my sister and I bought my mother a transistor radio from Valley Drug on Main Street that the owner, Mr. Jesús Gutiérrez, let us buy with the promise to make payments. Our school, Holy Cross, was across the street and we used to go in every day to get a cherry Coke. I am not sure we even made a down payment, but somehow, we took the radio home. Mother loved it and carried it with her back and forth to school, where she worked as a third-grade teacher.

Payment time came too quickly. We had no money and began to avoid entering the drug store, which was hard. The lure of the incomparable grilled cheese sandwiches and Mrs. Gutiérrez legendary potato salad were put on hold until the time we could pay off the radio. Eventually Mr. Gutiérrez called our mother and told her we were errant on our payments. It was embarrassing when mother paid off the bill, but what could we do? Mother listened to that little radio for years. It was taped, retaped, and still played music.

The families began coming out of their rooms. Everyone was casually dressed, some of the children still wore pajamas. Shyly, and then more confidently people neared the books. I always made it a point to personally greet everyone, invite them over, and introduce myself. The children were always happy to see the books. The adults took their time and lingered near the stairs and by a table I set up near a storage room that housed motel supplies. I always brought a tablecloth and bookstands to display books.

The two Guatemalan sisters stayed together. I mentioned to the group that it was Mother’s Day and that we were going to gather in a circle and remember our Ancestors. We formed a circle, the adults in the front, the children behind or to the sides. I suggested we call out a relative that we wanted to remember and thank. Gratitude always brings people together and reinforces community. I thanked my mother, Delfina, for life. My husband, in the company of several boys who had gleefully latched onto him, called out Marthe, his mother.

One by one, we remembered mothers, fathers, grandmothers, grandfathers, a tía or tío. When we got to the sisters, the older one began to weep. She told us of her journey, how hard it had been to leave home and travel so far. Against her mother’s wishes she had brought her son’s birth blanket. DHS officials confiscated it and they never saw it again. And when she contacted their other sister who was living in the U.S., the sister refused to become their sponsor and asked them never to call back. Both sisters wept. Everyone was touched. After the heart-wrenching story, the older sister began to sing a hymn I had never heard. It was beautiful to hear. It was reminiscent of the hymn that is familiar to us who live in the Southwest, a song that has touched many generations and brought solace:

I have sung Bendito many times in church next to my mother, who always wept in Mass as she prayed for us and for our absent father. I have sung that song behind, in front of, and alongside many viejitas and viejitos, who sang out of tune, but with great devotion. One year I was consumed by a religiosity that convinced me for a short while I wanted to become a nun. I attended the daily 6:30 a.m. Mass with my mother and I sang it then.

And later, I sang the song onstage in the character of a woman like my mother, rushing home from work at noon to check to see if the alimony check had arrived, grabbing a can of cold peas to eat in haste. I have sung the song at night, praying in bed, alone and sad, full of unknowing. I have also hummed the song joyfully and with gratitude knowing who I was and where I was going.

When I heard the sisters sing that hauntingly beautiful song, I knew they would be fine. And despite their tears, I knew they were complete and whole. They were en route, headed to sponsors who would take them in and love them. Another pushpin signifying a journey completed.

The circle dissolved, children, families and the sisters retreated to their rooms. Many books were taken and yet there were still many on the stair landing and on the green plastic couch and on a nearby coffee table. The poster board was devoid of jewelry. My husband Daniel and I loaded up the remaining books.

Two young boys and a man offered to help us carry the books downstairs. Yes, thank you, I said. There was a soda machine on the first floor. A young blond shirtless boy asked the man if they could get a coke, but he was quieted with a stern look. I realized they had no money. Did I? I never have cash or any change and still struggle with money, but that day I found enough for three Cokes. Sodas in hand, our new friends climbed up the stairs, and headed back to their room, to await the call that meant their sponsor had sent money for that bus ticket to Los Angeles or Miami, and if they were lucky, a plane ticket to New York or some other place they knew nothing about, a pushpin showing where they were headed.

I imagine my mother Delfina listening intently to her transistor radio wherever she is now, in the great Unknown humming Bendito surrounded by the Ancestors. I often think of the sisters as well, and the song they sang that day. Mother’s Day. 2019. I had never heard the song, but it sounded familiar, as known and loved as the song my mother sang so many years ago through her tears in the early morning light of that year. That holy year. That year that I imagined myself holy.

Bendito is a beloved hymn that has succored generations throughout the Southwest and beyond. It is sung during processions and is a mainstay in Spanish Masses. Nothing is known about the author or its background.

In 2018 a friend walked into my bookstore looking for dictionaries in Spanish. This led to my meeting Kari Lenander, Executive Director of the Border Servant Corps (BSC). What was this organization that helped migrants on the border? And how could I get involved? People arrived with little, everything taken from them. Once here, they were given clothing, toiletries, and a backpack. What else would be in that backpack that they clutched on that interminable bus ride going to New Jersey or the plane to Chicago? A book for the journey. And so began the program, Libros Para el Viaje. Since then, an ongoing program has gathered and distributed over 35,000 books, who knows for sure how many. For more information on Libros Para El Viaje visit: https://www.borderservantcorps.org/libros-para-el-viaje

Denise Chávez is a Fronteriza writer, bookseller, and activist for sentient life. She and her husband, Daniel Zolinsky, own Casa Camino Real Bookstore in Las Cruces. Chávez is the author of The King and Queen of Comezón, Loving Pedro Infante, A Taco Testimony: Meditations on Family, Food and Culture and Face of An Angel, among other works. She is the Co-Founder, with Kari Lenander, Executive Director of The Border Servant Corps of Libros Para El Viaje/Books for the Journey, an ongoing Refugee, Migrant, and Asylum-seeker book gathering and distribution initiative that delivers books to children and families on the U.S./Mexico border. Chavez is co-editing, with Dr. Enrique Lamadrid, former Head of Chicano/Latino programs at the University of New Mexico, an upcoming anthology WE ARE HERE TO REPRESENT. The book features the work of multigenerational writers and artists telling the story of their service to refugee and migrant families.