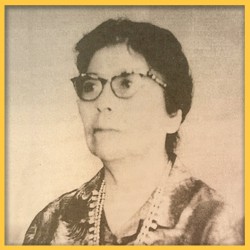 Just recently I watched a movie on Netflix called Te Ata, the story of Mary Thompson Fisher, a member of the Chickasaw Nation, an actress and storyteller who called herself Te Ata (which is thought to be a Maori word meaning "the morning"). Fisher traversed cultural barriers to achieve fame as an American storyteller, and I found her story particularly inspiring to me. Watching the film brought back memories and a vision of my Father's late paternal Aunt.
In the month of May we celebrate Mother's Day to honor our mothers, grandmothers and aunts, and for this Mother's Day I would like to share a story about my late paternal Grandmother who was named Chábáh Davis Watson of the Tl'aashchi'i Clan, Red Bottom People, from Wheatfields, Ariz.
Not everyone knows or reads about her, but she is included in the Official Navajo biography, and hers is a very interesting story. She retired as a Navajo teacher and principal on the Navajo reservation, where she had a great variety of duties. Chábáh  met and overcame many challenges and difficult assignments for a young woman with no formal training in the methods and techniques of teaching, and, of course, had constant problems during her entire teaching career. But always managed to overcome them. With 100 beginning students under her supervision and one assistant, it was a twenty four hour a day job because she slept in the dormitory with the children. She retired from the service of the Bureau of Indian Affairs on June 30, 1966, and was honored with the Continuous Service Award for 30 years of dedicated work for the Navajos.  And she made a trip to Washington, D.C., in connection with her work, after spending 36 years in all as an employee of the Bureau of Indian Affairs.
Writing this is very emotional for me because it brings back memories of her and my late paternal Grandfather, who she always called Brother when they visited each other in their homes and always maintained a close relationship with each other. Oh, how I miss them both dearly!
I hope some day she will be recognized for all her achievements as the greatest teacher for Navajo children and will be honored and entered into the National Women's Hall of Fame.

Ninabah Davis is originally from the Navajo lands from Lukachukai Arizona, grew up in Tsaile Arizona. She is Zun/water edge clan.