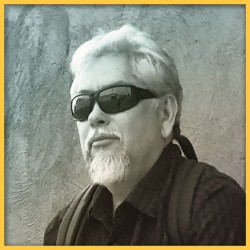 I have been unable to keep up with the gardening

This year and have had to hire help.

I have never hired help before, and I feel as if I

An unstated rule where we are supposed to do everything ourselves,

Even when we can’t, even if it kills us.

Before the workers begin, I ask Carlos if they have already had their morning coffee.

Si, y cerveza también. He replies with a smirk, as he leans into the hoe.

It is just past 6:30 and the sun is beginning to rise above the orchard’s tree line.

Supervising the milpa’s first escarda is a crow perched on a tree branch,

Hovering over us like Father Le De Ville in his Jesuit robe.

Arimandolé tierra, it is called, weeding and gathering the dirt around the plants

To fortify their graceful ascent towards the sky.

After we discuss the work that needs to be done, I tell them that

I have to go tend to my avalanche of emails, text messages, and writing.

As his hoe cuts sharply through a clump of goat’s head weeds.

We chat about how they are called toritos because they have sharp horns,

Con permiso, I tell the them as I make my way back to the house.

I look back and see the men, three angels hoeing the garden.

This reminds me of San Isidro who prayed while an angel plowed the field.

San Isidro is the patron saint of farmers, but he should also be recognized

As the patron saint of poets, writers, and artists who abandon their fields to tend to their craft.

I can see their shoulders swaying, stooped over as if unbuilding

A wall with prayers, hope, and acts of salvation.

The morning’s heat has not made its appearance and the air is still fresh.

The keys on my laptop click rhythmically to the sounds of hoe blades,

Magpies, crows, and a symphony of birds and the neighborhood’s roosters.

Inside the old house, I am blanketed under a solitude that reverberates

With the slow hum of my antepasados’ ghost presence.

This place is my querencia where I should feel at home, safe,

And sheltered from the demands of external obligations,

If it were not for the constant reminder that I, too,

Have plenty horses to break, saddle, and ride.

And maybe he was right, although sometimes I have a hard time

Grasping what he meant, there is more time than life.

After a while I reach a stopping point, meaning that I can no longer

Watch the men working my grandfather’s dirt without my participation.

I make my way back to Carlos, Prieto, and Ramiro.

That have been cut and uprooted.

Ya la gente mía no quiere trabajar, I tell him.

For some, there is no day off.

For others, the days seem to come and go,

thin as a veil of smoke swirling from a Pachuca’s cigarette.

Some of the local people say that Mexicanos

Are the best workers. No se quejan y no se rajan.

They do not complain and they never back away from a job.

And because it is getting harder to find good labor,

They are now the ones cultivating these lands

That once belonged to Mexico.

Maybe it is a form of poetic justice.

Untangling the Morning Glory vines from around the corn stalks.

He says it fast and at first I think he is saying gorilla.

When I ask him to repeat it, he pronounces it slower.

Maybe la vida is a question of who leads, who follows,

And how one gets from where they are to where they’re going.

Like the corre y vuela, are we not all in movement on our ascent towards home?

We go chooglin’ along like a choo-choo train rolling down the line,

The soul music of our lives, and the Snoop Dog Express singing us home,

Ana Gabriel and Antonio Aguilar in the caboose.

Carlos, Prieto, and Ramiro Come to Hoe the Milpa was inspired by the New Mexico Museum of Art exhibit, Poetic Justice: Judith F. Baca, Mildred Howard, and Juane Quick-to-See-Smith (Oct 9, 2021 – Mar 27, 2022). Some of the lines in the poem reference the titles of the artists’ paintings and narration from a short film by Mildred Howard.

I ask the young man standing

Behind the convenience store cash register

And a plexiglass shield between us.

At a historical marker five miles up the road,

I stop to take a picture of the Río Grande.

Laid out by several million years

Of wind and rain and tectonic eruptions.

Tucked into a hollow at the base of the marker

And a bundle of red silk tulips.

A month ago someone from our village

One side of the historical marker serves

As a Points of Interest map of the Pueblo and Indio-Hispano villages, churches, and ancient ruins along the Camino Real.

Because it was the water route the nuevos pobladores

Followed as they made their way up from Zacatecas

The other side marks the site as the first

Established in 1888.Those trained here made

Some of the earliest hydrological studies in the nation.

Is tagged over one of the corners of the sign.

Throughout the valley are countless of petroglyphs,

That tell of their presence and history,

Their comings and goings, their staying behind.

The cars on the highway whoosh past.

Folks eternally in migration and movement,

And there’s no slowing down.

Once, as a young man, when I was hitchhiking through this canyon

I was picked up by a hippie in a beat-up Ford Econoline van.

As we made our way through the winding two-lane road,

He remarked about how this place was starting to feel like home.

Hey, man, you know you can buy property anywhere out there, he said.

Crouched over the steering wheel like the Kokopeli dancer

Dangling from the rear-view mirror.

His long bony finger pointed out towards the plateaus and mesas.

I’m gonna get me a few acres and build a house.

I won’t have electricity or water, but I’ll be fine.

Through his dreamer’s naiveté and enthusiasm,

I saw how a slight change in perspective

Can really put a hop in a person’s skip.

Today, as I look across the gorge

I can see houses beginning to sprout

I wonder if one of those houses belongs

To that wandering gypsy-hippie dreamer.

Perhaps he too is looking out across the valley,

Looking down from a precipice of a mountain.

Knowing that life is limited but time goes on.

I was having a conversation with a childhood friend recently.

She was complaining about the younger generation.

She finds lack of manners upsetting and argues

for the need to teach good behavior and accept responsibility.

My friend laughs and places her hands on her hips.

She stands delicate but solid, like the sugar bowl on the table.

Sometimes I tell one of my nieces or nephews,

Go to the shed and get the rastrío.

A what? They ask, dumbfounded.

They come back with the rastrío, and say,

Rake up the leaves! I tell ‘em.

We have morphed into our new shells.

Coyote tricksters never out of style,

but never quite current.

Like a trailer home set on cinder blocks without the wheels.

The tense, present and fleeting always has us

Looking back to see how far we haven’t gone.

It is a perfect union, Like the cracks and creases of human skin.

That Texas bluesman had it right,

There are life-accounts that will not be placed on a historical marker.

They are shaped from a poetry crudely composed, unstructured,

And versed, not through well-crafted literary devices,

That expressed chaos with unconnected lines

Catch a patch of black ice and veer the truck

Unto the path of an oncoming vehicle.

And it’s true, we are living on borrowed time.

Levi Romero was selected as the inaugural New Mexico Poet Laureate in 2020 and New Mexico Centennial Poet in 2012. His most recent book is the co-edited anthology, Querencia: Reflections on the New Mexico Homeland. His two collections of poetry are A Poetry of Remembrance: New and Rejected Works and In the Gathering of Silence. He is co-author of Sagrado: A Photopoetics Across the Chicano Homeland. He is a member of the Macondo Writers Workshop. He is an Associate Professor in the Chicana and Chicano Studies department at the University of New Mexico. He is from the Embudo Valley of northern New Mexico.