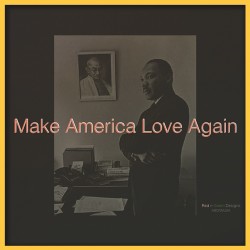 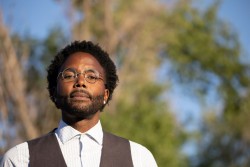 “On August 6th, 1965, the President’s Room of the Capitol could scarcely hold the multitude of of white and Negro leaders crowding it. President Lyndon Johnson’s high spirits were marked as he circulated among the many guests whom he had invited to witness an event he confidently felt to be historic, the signing of the 1965 Voting Rights Act. The legislation was designed to put the ballot effectively into Negro hands in the South after a century of denial by terror and evasion. The bill that lay on the polished mahogany desk was born in violence in Selma, Alabama, where a stubborn sheriff handling Negroes in the Southern tradition had stumbled against the future.”

Dr. King gets significant and deserved credit for being one of the greatest orators of the 20th century, however he never gets his just due as a poet. In the passage above, from the last manuscript he would ever finish in his lifetime, he married Mahogany with the violence unfurled on Black bodies in Selma one bloody Sunday. A mere five months before the passage of the Voting Rights act of the same year, two years before King retreated to Jamaica to complete this book.

Mahogany is a reddish-brown color. Blood and Black. His poetry was both pictorial and painful. Even in a moment of victory, the passage of the Voting Rights Act (perhaps King’s crowning achievement), the details the author dialed into were devastating. Then comes the volta. A word of Italian origin that is used to describe a shift of view, a change of direction or a transformation in a poem. King has one of those above also. He takes a turn towards hope when he reminds the reader of that “stubborn sheriff” who ended up on the losing end of a head-on collision with the future.

And in the time since King’s passing it’s become more and more difficult to tell who is on the losing end. At the time of this writing, 19 state legislatures have passed 33 laws limiting voting rights with more on the way.(1) If the “New Jim Crow” is the carceral system (shout out to Michelle Alexander), then what we are now witnessing feels like nothing more than the old Jim Crow… again.

The whole point of the three march series that were the Selma Marches, was to protest the blocking of Black Americans' right to vote (2). As well as, draw national attention to the murder of Jimmie Lee Jackson, a Black Civil Rights Activist and deacon who was murdered a month prior in Marion, Alabama while also protesting for voting rights. It was the defining struggle of that generation. It is sad, and perhaps poetic, that it is turning out to be the defining struggle of a generation… again.

I prefer to think that Dr. King, the poet, routinely and mischievously flaunted his poetic license in order to disobey the “grammar police” by meticulously encrypting his political writings with literary devices. You could call them poems. Something to where the volta simply means…

Martin Luther King III, Dr. King’s eldest son, recently told Axios, "Every generation has to earn its freedom, and so this is a form of re-acquiring the freedom. We shouldn't have to do it. But we do have to do it, and we are going to do it, because the voting rights of people are far too important." The family of Martin Luther King Jr. is urging the public to effectively boycott MLK Day celebrations if Congress doesn’t pass one of the two national voting rights protection bills currently circulating about its chambers. The approach is being called “no-celebration-without legislation.” All too poetic, just like the clever notion of boycotting a filibuster or putting the words “poetic” and “justice” together and calling it a thing.

Volta sort of sounds like vote. That’s not poetry, nor is it a coincidence. However, wouldn’t it be ironic if the last MLK Day people didn’t gather due to being in the throes of a global pandemic and this MLK Day people don’t gather for cause. Or would it just be sad? Sad how far we haven’t come. A mourning of the progress we’ve lost. Or maybe, just maybe, King left.

Hakim Bellamy is the inaugural Poet Laureate of Albuquerque, New Mexico. Dr. King’s life and legacy have been the inspiration for numerous poems, publishings and a one man stage show that Bellamy has produced. He has been the annual Dr. Martin Luther King Jr. Day of Service keynote at Amy Biehl High School for over a decade. www.beyondpoetryink.com