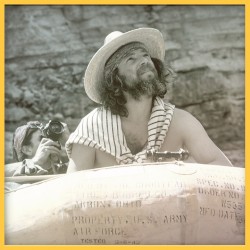 It’s tough to overcome inertia, especially when it is self-imposed by presumed limitations. I speak from experience as a mid-point octogenarian having survived the last eighteen months of pandemic living in relative isolation from my fellow humans. For someone who has been a writer and radio producer for many years, solitude remains a hallmark of existence, a domain treasured for private reflection and hopefully, creative thought. However, isolation enforced by the determination to remain out of virus-ridden harm’s way casts a different spin on one’s perception of solitude.

The flow of Nature has carried me through many rapids as I row my way through my decades. Running rivers in my own raft has inspired the enduring metaphor of my lifetime. I’ve learned that failing to pay heed can lead to disaster.  To be alive includes recognition of the nature of the unexpected, and responding consciously.

My generation of monocultural Americans has fostered over-indulgence. I can’t exclude myself even though I criticize this collective failing that has brought our geo-biotic community to a possibly fatal impasse. “Head ‘em off at the impasse!” shouted my old compañero, Ed Abbey as we contemplated a clouded future forty years ago. Ed didn’t get to be an old man. But I sure did, and I can tell you that the rapids of old age spark realizations that must be addressed lest one sink into the fatal eddy of inertia.

I have sought Nature’s truths by wandering afield with recorder and microphones recording songs and perspectives of indigenous tribal members whose knowledge of homeland is imbedded in cultural music and lore and reveals deeper truths than found elsewhere, truths that unveil intuitive understandings by virtue of shared cognition with osprey, deer, the leaf-cutter ant.

It was just sixty years ago while having a peyote vision in a rural setting on Mount Tamalpais in Marin County that I came to realize the necessity of “pulling all the nails out of my frame of reference” and opening my consciousness to the myriad revelations spawned by the flow of Nature. Now, I’m attempting to re-wild my consciousness, trying to digest the realization that I’m spawned by this Earth, that I belong to the fabric of this Earth, that indeed I am an Earthling who has spent most of my life seeking to un-dam the flow of Nature through human consciousness, ever abandoning unnecessary meanders into stagnant eddies of soul-debilitating pursuits. I love this planet Earth with an abiding passion. I seek to re-wild my consciousness in order to restore my intuitive understanding of how best to comport myself as a latter-day natural being.

Our rural homeland is less rural than it was a quarter century ago, yet it still harbors wildlife. We put out water for the birds, coyotes, bobcats and snakes. I remain fascinated as I look through my western window at different species who take their turn at the “watering hole.” Red-shafted flickers don’t chase off mountain bluebirds, while robins are very territorial, even within their species. The Bendire’s thrasher hops into the water, splashes with great vigor and then jumps to the edge of the birdbath, shaking away water like a dog. It’s a real thrill when a Cooper’s hawk comes by for a drink. Ravens frequently soak scavenged morsels of food in the water to tenderize them. Ravens are particularly intelligent having as many as two hundred different vocalizations available in their linguistic repertoire.

I’m fascinated by snakes of which we have neighboring bull snakes, red racers and the occasional prairie rattlesnake. I’m very careful to move each rare rattler into my ice chest never harming it physically. I drive a dozen or so miles down the highway and release it into a countryside less likely to be trekked over by humans. I know I’m messing with the rattler’s sense of geography, but rather that than endangering occasionally visiting kith and kin, or the snake itself.

I watch the night sky almost every night. I’ve twice noted that May 6th is my last time to see the constellation Orion disappear into the afterglow of sunset before he re-appears in early autumn. The furthest I can see with the naked eye is the Andromeda galaxy two and a half million light years from here. It’s harder to see than some years ago when the air was less murky and light pollution less pronounced. It’s predicted that the Andromeda and Milky Way galaxies will collide in four or five billennia.

These are some of the ways I try to re-wild my current state of consciousness. Now, as we tentatively approach a turning point in this time of pandemic, I look back and realize that I haven’t wasted my time minding the flow of Nature passing through the present moment, or watching birds through my studio window, or walking, limping a bit through my morning saunters, or reading poetry, or even snoozing. This is who I am. This is what it is to be an elder who continues to advocate in behalf of our planet Earth while re-wilding my own consciousness.

(The original longer version of “Invigorating Metamorphosis” was published in the August issue of The Gulch magazine in Durango, 2021.)

Jack Loeffler is an aural historian and author who has lived in the northern Río Grande watershed for nearly six decades. He has published numerous books and essays, has produced hundreds of documentary radio programs for Public Radio, and many sound collages for major museums that address human history, cultural diversity, folklore and music, environmental awareness, and watershed consciousness. His most recent book is a personal memoir entitled Headed into the Wind published in 2019 by UNM Press, while current essays appear in anthologies published by U of AZ, Museum of NM, and U of Chicago Presses. He has donated his extensive aural history archive to the New Mexico History Museum at the Palace of the Governors in Santa Fe.