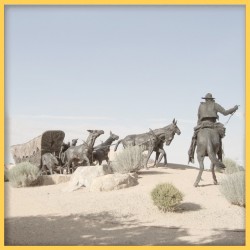 On November 13, 1821, almost 200 years ago the alcalde (mayor) of Abiquiu, Pedro Ignacio Gallego, led a contingent of 200 citizen-soldiers and various Pueblo Indian allies on an expedition in pursuit of Comanche Indians who had just raided San Miguel del Vado. A few miles west of present-day Las Vegas they encountered a group of six well-worn and well-traveled men led by William Becknell who had just crossed the plains. Welcomed and ushered into Santa Fe where the governor personally welcomed them, Becknell and his compatriots from the United States traded their goods at a surprising profit. He would return the next year with wagons and garner a larger profit. Thus Becknell is given credit for opening the Santa Fe Trail.

Little did either Becknell or Gallego, much less the governor, realize that they had participated in a major event in the history of New Mexico and the United States. “Opening” is the key word, for before Mexico won its independence that same year, neither trade nor travel between the United States and Mexico was permitted. People from New Mexico had explored the plains and wagons traversed on what would become the Santa Fe Trail as early as 1601. The story of mule and wagon trains and the international commerce that went over the trail has been related many a time. However, the trail’s importance comes from a larger context.
For much of its history New Mexico was an island in the wilderness, a unique European settlement among Native cultures in the middle of the continent distant from the so-called frontier lines of the United States and Mexico. Two distinct cultures would expand over time from these two places, and New Mexico was situated in the crosshairs of the expansion of the two European-become-American cultures. The meeting of these cultures would be played out on the homeland of many Native, mostly Pueblo, cultures. The first of the expansions came from the south and was primarily Spanish Catholic. Much later, the primarily English Protestant culture expanded from their initial settlements on the East Coast.
These two movements had their impetus in England and Spain -- the former the leader of the Reformation and the latter of the Counter-Reformation. The former gave birth to Protestantism while the latter defended the Catholic Church. Those biases came to the Americas with the first explorers and settlers and remained evident in their respective American descendants through the centuries, even though the two cultures constantly changed over time. They had the same experiences as they moved through the continent. They encountered new people, animals, topography, foodstuffs, plants, etc. In short, they became American while retaining some vestiges of their European antecedents.

And, the apex of these two cultures meeting again came when the Santa Fe Trail opened and connected to the Camino Real. The Santa Fe Trail from the eastern United States and the Camino Real/Chihuahua Trail from central Mexico joined east to west, south to north. The two trails became the veins through which the cultural lifeblood of both peoples flowed. Simply put, Horatio Alger met Paco (or Francisco Claivjero, for our intellectually inclined); the Puritan Ethic came up against Neo-Aztecism.

Beyond the trade goods, the tale of the trails is about the clash of cultures. Because the Santa Fe Trail came to a place already established from the south by Catholic Counter-Reformation Spain, Old World prejudices came to the fore. New Mexico was the hub of this important American confrontation that would play out in the Mexican War, New Mexico’s long territorial status, voting rights, the Spanish American War, all the way up to the attitudes still prevalent today.

For the most part, New Mexico accepted the cultural influence of the Santa Fe Trail. For the first half of the trail’s history before the Mexican War, most of the trade originated at the Mexican end of the trail. New Mexican Hispanics went to school at Saint Louis University and later Georgetown University. Some merchants, including New Mexico’s governor Manuel Armijo, had bank accounts in the United States. Respective languages as well as customs have survived. Until recently, New Mexico’s history was a story of inclusivity. Can a message as simple as “it is better to enjoy the chile (even for breakfast) than kill the cook" or “appreciate a Native dance rather than kill the dancers” survive? These are simple questions from a New Mexican perspective, but not necessarily so internationally.
The question was raised 200 years ago.

Thomas E. Chávez has a Ph.D. in History from the University of New Mexico. He is a member of the Board of the New Mexico Humanities Council, a Corresponding member of Spain's Royal Academy of History, and a Research Associate Professor for the Latin American Iberian Institute of the University of New Mexico. He has published twelve books of history, three of which have been published in Spanish translation in Spain.