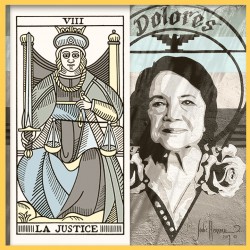 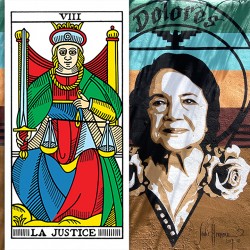 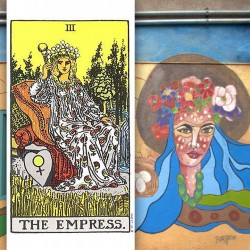 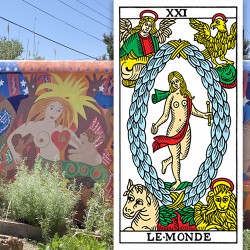 It’s impossible to travel through Albuquerque without encountering at least one beautiful, larger-than-life mural on the side of a building or wall. The practice of mural painting—which has ties to Mesoamerican artistic traditions dating back to pre-Hispanic times—is a major part of the Chicano art movement. In addition to giving space to artistic expression, Mexican muralism has been used to communicate social and political messaging throughout the 19th and 20th centuries. The vast space of a building wall allows an artist to tell a story, which the viewer can take in all at once while simultaneously picking out the subtler details over time.

Another form of image-making and storytelling with a long historical lineage is the Tarot. Modern Tarot as we see it derives from decks illustrated in the mid-15th century, with links to Ancient Egypt and other early Indo-European cultures. Decks were circulated as playing cards in the French and Italian royal courts, but they were also used in occult practices for divinatory purposes. Tarot cards are familiar to us nowadays as a deck of cards with four suits and twenty-two archetypal cards known as the “Major Arcana,” depicting “the Fool’s Journey.” This journey is meant to tell the universal human story of growth and transformation in the inner and outer worlds. Whether or not one believes in the power of telling the future from reading the cards, the archetypes represented in the deck speak to larger, universal human narratives. Also, because the Tarot has such a circuitous heritage, it is very likely that the visual representations and archetypes link back to many different early mythologies and spiritual/religious practices.

Driving through Albuquerque one day, I was stopped at red light on Broadway Blvd. and Lead Ave. and became particularly aware of the proliferation of murals on walls all along the road. That initial experience of noticing the “muros” made me more keen on noticing all the painted walls in this city. Each time I encountered a new mural, I began to make associations between the stories told on these murals with archetypal imagery from the Tarot. Some murals and tarot cards bore striking resemblances to one another, and with others, the similarities were slightly subtler. Whether these associations are intentional by the artists or not, they are indeed present. Visual representation of the world is central to human civilizations; it’s a form of storytelling, and expressing narratives for ourselves is vital to our ways of life. Archetypes are characters that continue to show up in myths and stories across different eras and cultures. The variety of interpretations for how an archetype is expressed are infinite. The traditions of Tarot and the murals I was noticing throughout Albuquerque illustrate this.

The first major comparison I made was between the Justice Tarot card and the Dolores Huerta mural located at 320 Broadway Blvd. Huerta’s portrait was painted with geometric patterns in the background and two roses flanking her on either side. The presence of these roses are symbolic of a few things. First, red roses have been an icon of the socialist cause and social democracy. With Huerta being known for her passionate advocacy of farmworkers’ rights, the inclusion of roses makes sense. Second—and perhaps not as obvious—the two roses beside Huerta on an equal plane suggest equilibrium which invokes the archetype of Justice. Justice is always depicted as a person holding scales, both in the Tarot visual lexicon and elsewhere. Just as Justice is an icon of balance and truth on the Fool’s Journey in the Tarot, so too is Huerta representative of the fight for a more just world where workers are valued appropriately for the labor they do.

After noticing this striking similarity, I started to look more intentionally at the Albuquerque murals to see if there were any other Tarot connections to be made. It turned out there were quite a few. On the side of the Flying Star building at 3416 Central Ave. in Nob Hill (home to many murals), there is a portrait of a woman with a floral halo, blue locks of hair evoking ocean waves, surrounded by foliage, nesting birds, and birds in flight. This image stands out to me because it reminds me of the archetype of the Divine Feminine, which expresses a message of the beauty and abundance found in the natural world. In the Tarot, this archetype is depicted as The Empress, whose role in the Fool’s Journey is to remind us to tap into this feminine energy in order to strengthen our relationship to Mother Earth. Another example of these visual similarities is found in the “Garden of Muses” mural in the community garden of The Source Community Healing Oasis. This image was painted with the intention of depicting several different symbols from the mythologies and spiritual practices of Antiquity. The imagery draws directly from the same era that Tarot was created.

Archetypes and their reinterpretations continue because we see ourselves in these characters, and there is a real human need to identify with our stories and beliefs in order to construct our cultures. This is true for all kinds of storytelling, but the fact that there are recurring characters who show up throughout art history and across cultures is a testament to our humanistic similarities, while demonstrating the beauty of our differences.

After I followed my instinct to look for murals that shared symbols and iconography with the Tarot, I realized that these images and the associations I made had led me on my own Fool’s Journey. And this is sort of the point: to set out on a meandering journey with intention, but little expectation, to be transformed through the external world and the creative expression of others. Consider, on your next outing in your city, looking at the images and stories painted on the walls, and let those characters help you make your own personal discoveries.

Bethany Tabor is Program Officer of the New Mexico Humanities Council.  Born and raised in Albuquerque, she holds a BA in Art History and Philosophy from Saint Mary's College and an MA in Performance Studies from New York University. Her scholarly work centers around differing cultural attitudes toward death and dying; she is most interested in the recent cultural shifts in ritualization and memorialization in the West.

Chocolate: From Food of the Gods to the Food of Love