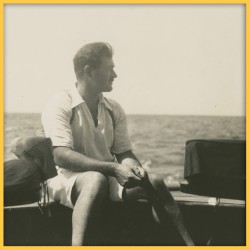 Credit: Credit: Ernest Hemingway at his home in Cuba, circa 1950s. Courtesy of AE Hotchner. 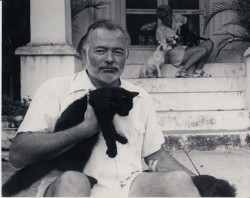 Credit: Ernest Hemingway at his home in Cuba, circa 1950s. Courtesy of AE Hotchner. 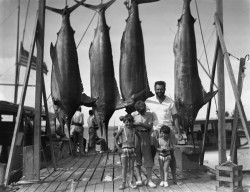 Me and Ernest. Then and now.

The acclaimed author Ernest Hemingway once described his work in a letter to his second wife, Pauline Pfeiffer, in 1933: “I am trying to make, before I get through, a picture of the whole world – or as much as it as I have seen. Boiling it down always, rather than spreading it too thin.”

Most folks encounter Hemingway’s writing in high school or college as part of the “must read” authors and with good reason. He was the first modern writer to make himself a character as large and powerful as his stories. With the advent of social media influencers and YouTube celebrities, this is now common practice, but when Hemingway did it, only the beloved Mark Twain could claim a similar success. This is why his writing is still revered and his influence still felt – even when the man himself has been largely forgotten by modern readers.

For me, the Hemingway work that stuck was The Old Man and The Sea. I was stunned at its raw emotion, specifically Hemingway’s ability to depict a man fiercely at war with the natural world. I struggled with the symbolism; was the fish really a fish, or a metaphor? Did the boy represent the hubris of youth and the Old Man, God? Later I learned Hemingway wrote a friend: “The sea is the sea. The old man is an old man… The sharks are all sharks, no better and no worse.” So much for symbolism. The man himself set me straight.

In college, reading Byline, a compendium of Hemingway’s correspondent pieces from World War I, I was struck at what a powerful journalist he was in addition to the fictional powerhouse I had known. Both his talent and his ego ran the gamut. He experienced the horrors of war firsthand and told it as he saw it – a skill that would serve him well in his oeuvre.

And of course, there was the legend of the man himself. Larger than life. African hunter, deep sea fisherman, amateur boxer, raconteur and lothario and the (alleged) inventor of the daiquiri. His myth appealed to me both as a reader and a young man finding his place in the world.

Now our paths have crossed again. At NMPBS, we’re airing the phenomenal new six-hour Ken Burns documentary series: HEMINGWAY. Having seen it, I was amazed at its depth and at all that I didn’t know about the famed author and the complicated, emotional man he was.

The press release describes it better than I can: The series paints an intimate picture of the writer—who captured on paper the complexities of the human condition in spare and profound prose, and whose work remains deeply influential around the world—while also penetrating the myth of Hemingway - the man’s man - to reveal a deeply troubled and ultimately tragic figure. The film also explores Hemingway’s limitations and biases as an artist.

In companion pieces on our local art series, COLORES! we explore Hemingway’s relevance in a unique place – the creative writing program at IAIA in Santa Fe. There, they don’t study his works, but adopt his mantra of writing what you know, writing who you are to produce a great story.

A second COLORES! piece focuses on how Ernest Hemingway and John Dos Passos forged a deep friendship during WWI as ambulance drivers. Santa Fe Author James McGrath Morris delves into how witnessing the colossal tragedy of the war and their critical relationship impacted their writing and American literature. You can find both pieces at iColores!

The HEMINGWAY series has led me back to his books, A Farewell To Arms, and For Whom The Bell Tolls, works I enjoyed as a young man but only really understood as I grew nearer to the age in which Hemingway tragically took his own life. While I usually sink into his books with a glass of Scotch, going forward I may have to take up the fine art of the daiquiri.

Episodes of HEMINGWAY are now available streaming at NM PBS

Michael Privett works as the Communications Manager at NMPBS in Albuquerque. He is a proud father of two teenagers and calls Rio Rancho home.